Introduction
The B16 is not just a penalty area; actually it is also the oldest regularly-occurring festival in this country. The festival acquired its name many years ago as a symbol of amateur filmmaking: from the 16mm film camera. We continue to use this name even though digital formats have overtaken analogue in the last decade thus blurring the line between professional and amateaur.
The main thing remains: there will be short films from over 40 countries, the meeting of various perspectives on the craft of image-making and the expanding of contacts among filmmakers. This year we chose from 356 submissions – the best 60 will be presented in the main competition. You can expect great genre diversity, social themes, low (even zero) budget films (but very creative), unexpected turns and witty twists on clichés.
The Brno Sixteen will also recall a period when it was still a young festival. We have pulled out of our archive a selection of shorts made in the 1960s at the FAMU Prague Film Academy. There will be a tribute to the famous teacher of directors of the Czech New Wave, the recently deceased Otakar Vávra – there will be a cycle of his early avant-garde experimental films of the 1930s. We also consider the retrospective of Romanian short film a real gem in this year's program.
Thanks to the friendly co-operation of the Moravian Gallery, you will have a chance to see experimental 8mm and 16m films in a baroque hall – it will not only be possible to view the screen, but to observe the projection artist at work as well. This is fun! We recommend a trip into the past to all technophiles: there will be a unique exhibition of historical projectors and film cameras of the legendary manufacturer Jindřich Suchánek.
The festival has undergone immense changes this year – visual, organizational and programming. We want to add a bit of dazzle to the B16 and this, the 52nd year, is the first step in a new direction. Let's take that step in the right direction.
Marek Loskot, festival director 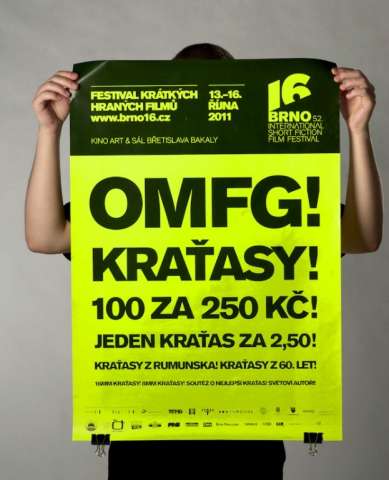