Introduction
We are family and have been for 58 whole years. And no, we are not drinking anyone’s blood. Although it’s true that we replace ourselves every once in awhile. Our team has been working on the festival for about five years. We are family. We often eat together, sometimes we sleep together, too. And we all really like short film. The great advantage of short film is that it’s not long — although if you have to watch seven hundred of them, all films seem long. That is how many submissions we received this year and we have selected 42 films to compete at the festival. We also like people who bring their films to us and people who come to watch those films. And most of us like dogs and cats.
We are family. We often argue, but in such a way that nobody can really tell, because we know that we can’t really afford to break up. Because if we don’t organise Brno 16, nobody will. We feel that responsibility — we are good parents. We test the boundaries of what we can do — as children do. We are family. We stayed in Brno. We are not ashamed of that, because being ashamed of Brno went out of style about four years ago. And Brno is also one big family, all you need to do is start something with someone from Brno and you’ll understand. We are family, but we’re also international. We like flying on planes and we have great taste. We choose films others are afraid of choosing. And then they’re cursing themselves! We are the good conscience of all the other festival programmers.
We are family. And as you’re reading these lines, we are hating the festival with passion. But we are family. And it’s our festival. We struggle with accepting criticism, we’re territorial as mama bears. We’re hospitable and we enjoy making you drunk and dancing with you. We are family and this is our family party. And you are invited! Because, for a couple of days — or forever, even — you can become a part of that family!
Brno 16 Team 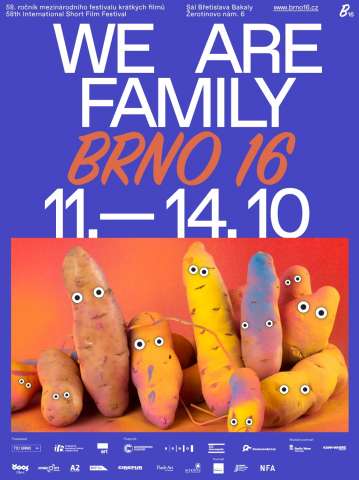