Introduction
We have been warned. We read the sign on the wall. We knew it would be a struggle. We lived in fear of radiation, communal election results, whimsical ideas of grant comissions, glutten. Armed with camo pants and Zara t-shirts, hidden in musty offices, cafés, messy beds, we prepared the next edition of this international film festival for you.
Many of us are veterans from the years past, some are but greenhorns. All of us are spoiled by Brno, where there's always something going on and something good to snack on. You can get hit by a pizza delivery car, or swallowed by a tram stop, your heart can stop while reading news from countries you don't care about, you can overdose on café latte, or jump into Svratka river. But there's still a lot to fight for and a lot to fight with.
We fight for good films, for their existence. So that they can stay among people, become a stable fixture as pigeons, and not end up in a museum among fake mushrooms made of plaster. That they can be created in all classes of society, all ages, on every format, in every genre. We fight for Brno, so that we can be proud of it and it can become big not only on the city map. That we can desire to stay here, or just happily visit once in a while. We fight for culture, so that it can stay as delicious as Phở Bo, more frequent than night buses, tougher than Kometa. That it is confident, rewarded, that you like it and it fills you with sacred dread and happiness at the same time. We fight for the world, so that it is still here tomorrow. Radioactive clowds scattered in the stratosphere can cover it at any moment, or it can by disintegrated by ignorance, split by disinterest, swallowed in the feeling or morning grumpiness. You can fight with us. But you don't have to, you can just watch the films. That's totally fine.
Brno 16 Team 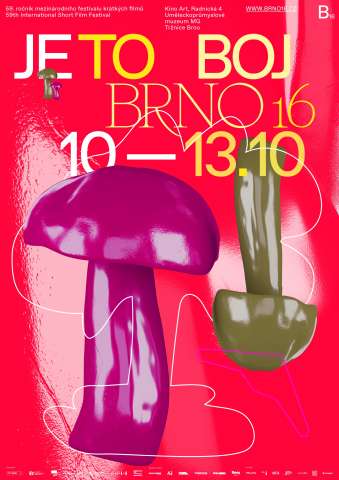