Introduction
Dear friends of Brno and good cinema, this year’s edition of Brno 16 is its 60th and is back in Kino Art which is celebrating its 100th birthday. Anniversaries tend to be – to my dislike as it is always a tedious routine – used for distinctive exclamations reflecting history and simulating the future. The way we see reality that has not yet happened is formed through the way we feel right now. And i am writing these lines right after the euphoric moments of Kino Art’s rebirth and living through these rounded-up moments knowing that the world is all right and that film art will be here to stay and bless our daily routines for the next 100 years. Let’s enjoy what we have right now, including this festival which presents not only current work but will also give space to past visions of the future which directly force us to think about the present. And because our cinema is back, we couldn’t resist refreshing other places in Brno through film, including Villa Löw Beer, Alliance Française, and our exile space No Art on Radnická street. And there is also space for gestures such as our invitation to pak Lužánky where the very first Brno 16 took place. What was it like? And what is it like today? I personally highly appreciate the historical continuity of the festival which is known as one of the oldest continually running festivals in the Czech Republic and former Czechoslovakia. Not even the teethof time along with the turbulent development of social and political context destroyed the institutional connections with the city through its organisation TIC BRNO. Brno, thank you for allowing Brno 16 to keep resisting cultural centralism and shine like a star upon your sky. The festival is in great condition and will repay the city for its warm embrace. Brno remains a constant on the map of film culture not only in local, but also international context.
Jana Janulíková, director of TIC BRNO, p. o. 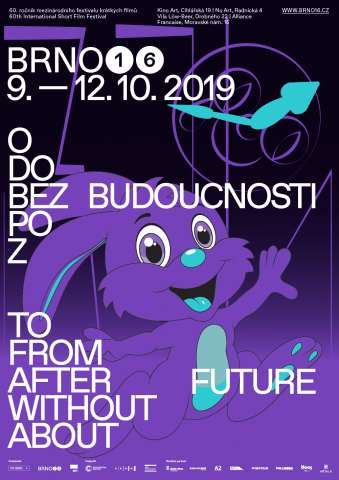